National Anthem at the Steelers vs. Giants Game!

On December 4th I had the AWESOME opportunity to sing the National Anthem at the Steelers vs. Giants game!! To sing in front of 72,000 screaming Steelers fans is something so amazing it's almost too difficult to put into words!!

I was standing on the 50 yard line waiting for the players to be announced, and I was SO "pumped up", because as the players were being announced and running onto the field, I was cheering them on and then they were coming up and "fist bumping" ME!

I then sang the Anthem immediately after, and the entire stadium got very quiet. As I ended my performance with a high note on "and the home of the brave," the audience erupted in cheers!

To top off an amazing day, the Steelers won AND I got to spend time with my family who joined me for the game! 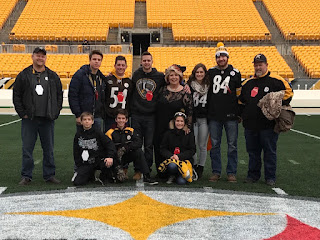 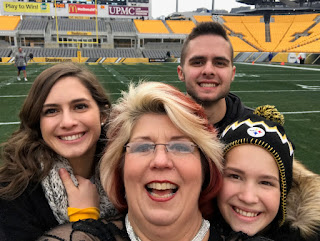 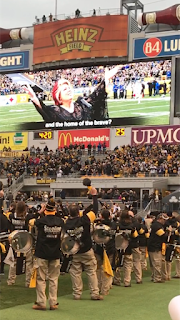 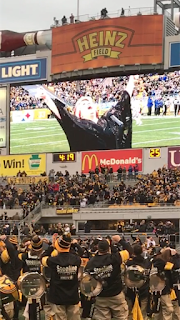 Thanks so much and all the best to you for a wonderful holiday season!

Posted by Unknown at 3:33 PM No comments: 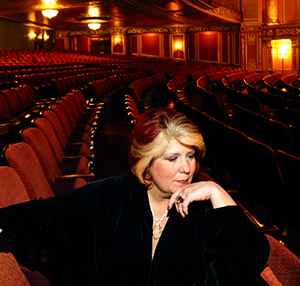 On Sunday, October 30th at 3pm at Valley High School in New Kensington, I will be giving the final concert for the Allegheny Valley Concert Association's series. The series has been around for 60 years and this recital will be the last concert the organization produces!

I am looking forward to coming home and sharing my recital From Verdi to Broadway (with some spirituals in the mix), featuring composers such as Verdi, Wagner, Cilea, Saint-Saens, Bernstein, Lerner and Loewe, Rodgers and Hammerstein, Cole Porter and many more!

Please click here to read more information about the upcoming recital. Hope to see many of you there! Tickets can be purchased by calling 724-335-1937
Posted by Unknown at 2:13 PM No comments:

There is nothing more satisfying, exciting or humbling than to have a scholarship in my name helping the future stars of opera!!!

THE MARIANNE CORNETTI YOUNG ARTIST SCHOLARSHIP has been created by The Opera Theatre of Pittsburgh!

On April 16th, a GALA, THE GREAT GATSBY AFFAIR, held at the Pittsburgh Golf Club will help fund this scholarship.

Please join me for an evening of SPECIAL singing, dinner and dancing! Just a hint: DONT MISS the 5:30 seating!!!! SEE YOU THERE!!!!!

Click here for more information and to purchase tickets
Posted by Unknown at 2:19 PM No comments: 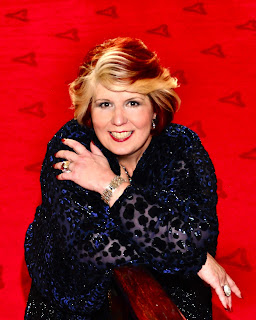 May 11th I am giving a lecture recital in London on the dramatic mezzo soprano repertoire that I sing and the interesting character a that I portray!!!

Tenor Neal Cooper will join me in singing some of the GREATEST duets in all of opera!!!!

I can't wait!!! I HOPE TO SEE YOU MANY OF YOU THERE!
For tickets please contact Lucy@divasandscholars.com
Posted by Unknown at 2:14 PM No comments:

Marianne Cornetti to Receive the International Woman of Spirit® Award

SO PROUD TO BE FEATURED IN THE APRIL EDITION OF THE PITTSBURGH MAGAZINE FOR THE 2016 WOMEN OF SPIRIT AWARDS!

What a HUGE honor it will be for me to accept the International Woman of Spirit Award APRIL 7th at The Carnegie Music Hall in Oakland! Presented by Carlow College. I would LOVE to see MANY of you there!

I am HONORED and OVERJOYED to share this amazing news with you.
It has been announced that I will receive the INTERNATIONAL WOMAN OF SPIRIT AWARD for 2016 at The Women of Spirit Awards at Carlow University. This award has only been given one other time - to Queen Noor of Jordan.

The Women of Spirit Awards will be presented on Thursday, April 7, 2016 at 8 PM in the Carnegie Music Hall, 4400 Forbes Avenue, Oakland. The awards program is preceded by a reception beginning at 6:30 PM.

The Women of Spirit Awards are a beautiful Pittsburgh tradition that recognizes women for their professional and personal leadership and their service to others. I am humbled to be joining the ranks of the distinguished and inspirational women for 2016 and those who came before me.

I hope many of you will join me at the gala to support Carlow University and this wonderful program.


Click here to read the full press release from Carlow University
Posted by Unknown at 8:00 AM No comments:

Join me on Sunday, December 6, 2015 from 1 - 4 PM for a new masterclass series, Divas and Donuts with the Potomac Vocal Institute in Alexandria, VA.

"While we all enjoy our fancy masterclasses, it’s time to get sugared up and down to work. This year, we are hosting some of the opera world’s most exciting artists in an very informal question and answer/ masterclass setting. Don’t be fooled: just because the class is casual, the work won’t be. These ladies are at the very top of their fields and will put you through the paces!

Singers will be chosen from the PVI studios, but the events are open to the public and all are encouraged to attend! Fee for singers and attendees is only $20; please register so that we know you are coming!"

Visit potomacvocal.com to register. Hope to see you there!
Posted by Unknown at 5:31 PM No comments:

It has been 10 years since my first concert at The Andrew Carnegie Free Library & Music Hall! What has taken place over these 10 years of renovation is nothing less than EXTRAORDINARY!!

As Maggie Forbes, Executive Director quoted so beautifully, "it has been a transformation from rundown to remarkable, moribund to magical."

I can't tell you how much I am looking forward to returning and singing arias by Wagner, Verdi Gounod and many more, on November 1, 2015 at 3 PM in this magical Music Hall that has become one of Pittsburgh's jewels!

Posted by Unknown at 7:52 AM No comments: